We have been hard at work in the basement, so there has not been much cooking, sewing, or creating of any kind going on. Hopefully soon, but for now here is a little

1. Americans will celebrate Labor Day this coming weekend. Do you know what we're actually celebrating? (without consulting your friends Google or wikipedia, ahem) What's a project you're currently 'laboring' over?

Since I work for a company who employs union truck drivers, I do know that Labor Day is a day of rest to celebrate the labor force and their contributions to the American economic system.
If you are new to The Adventures of D and V, you may not have heard of our Operation: Finish Basement project. There is a tab at the top of the page with links to all the progress posts. I have a post ready to go for tomorrow, but here is a sneak peak at what we are working on... 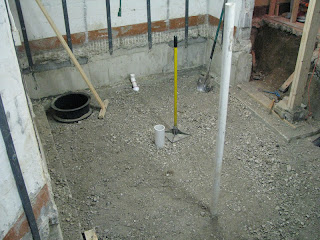 (Yep, that's the floor of our basement. The NEW floor level (2 feet deeper than the old floor level)
2. Labor Day also signals the unofficial end of summer for most of us...what summer food will you miss the most? If you're in the southern hemisphere feel free to substitute winter for summer.
All the fresh fruits and veggies from the farmer's market - specifically watermelon.

3. A well known proverb states, 'It's easier to seek forgiveness than ask permission.' Your thoughts?
While I agree that often this is true, I personally prefer to ask for permission first. Mostly because I feel so guilty if I am doing something that I know I will have to ask forgiveness for that is wouldn't be worth it!

4. Food critic, film critic, book critic, art critic....which hat would you most like to wear?Food critic! I love tasting new things and experimenting in the kitchen. Our favorite show is Master Chef - and I would love to get to try the food they make! I don't know much about art (besides what I personally do and don't like!), I am not a fan of artsy movies and usually have not seen a single film that gets nominated for the Best Film of the Year at the Oscars! I much prefer a good action or romantic comedy.

5. When you were a kid, who (besides your parents) was your favorite adult?
Gosh, I don't know if I could pick just one...My grandparents and aunts and uncles were all very involved with my life when I was a kid, so I would have to say them! Or maybe one of my swimming coaches, or school teachers.

6. The astronaut, Neil Armstrong, passed away last week. He was regarded as a hero by many generations of people all around the world. Do we still have modern day heroes? What makes someone a hero?
I think we do still have heros. Since the Olympics just ended there are lots of sports heros like Gabby Douglas and Michael Phelps. I don't think it is the same as when Neil Armstrong became a hero. The media today hounds 'famous' people and makes every detail of their life public knowledge. Heros are more of a here today, gone tomorrow thing now. Take Lance Armstrong for example. For so many years he was a hero to people all across the world. And now...well, not so much. I would define a hero as someone who can be looked up to because of their positive contributions to the community.

8. Insert your own random thought here.
Mark you calendar to stop back here on Friday - I have a very exciting new adventure to share with you, and hopefully include you in it as well!
Posted by Veronica and Daniel at 5:13 AM
Email ThisBlogThis!Share to TwitterShare to FacebookShare to Pinterest
Labels: Blogging