Adventures in Motherhood: Choosing the Lesson

Caleb is now old enough to play with toys. Like really play with them, and pick which toy he wants to play with. And decide he wants specific toys more than others. This milestone has come much to the dismay of his big sister.

Previous to this Rebekah could 'trade toys' with him if she wanted what he was playing with, and he didn't mind as long as he was holding something.

Not so any more.

He wants what he wants, and if she has it, he wants it.

And if he has it and she wants it, and she tries to take it from him, he lets me know.

This is particularly true when it comes to the one toy they have booth decided is their favorite toy - our play stethoscope from Rebekah's doctor kit. Rebekah LOVES playing doctor (thank you Doc McStuffins) and is constantly giving her toys check-ups. 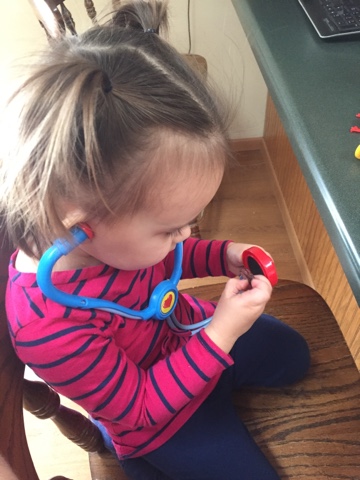 For whatever reason, Caleb has developed an attachment to the stethoscope. He is so happy when he gets to play with it. Look at how proud he is here! 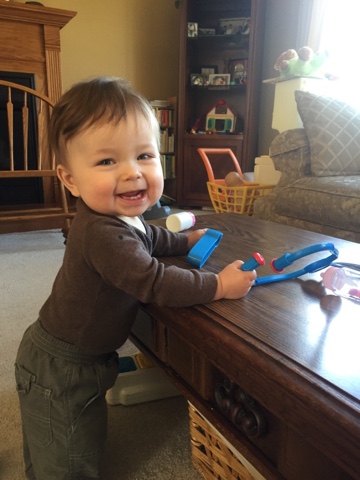 And if he sees that she has it, he crawls after her, trying to get it, and whimpering like an injured puppy. She is still quite a bit faster than him, but he is gaining speed and mobility with each passing day.

Yesterday, after a tear filled battle for the stethoscope, which ended in mommy putting the doctor kit away for a rest, Rebekah informed me that she would like to use her piggy bank money to buy her own "purple stethoscope just for her, not for Caleb". I have been going back and forth which lesson she should learn from this situation. On the one hand, I want her to learn to share with her brother. But on the other hand she could learn a lesson in money. Most of the money in her piggy bank has come from her using the potty chair at her great-grandparents house. So, it's money she has earned, and can use for things she would like...Maybe we could just go back to the time when Caleb would lay still for his check-up like this picture from a few months ago! 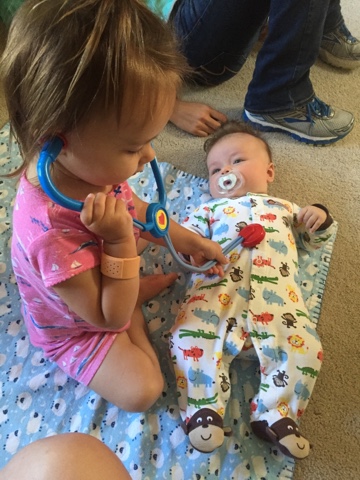 But that's not how it works. I guess I have to choose which lesson we are going to learn this time....

Posted by Veronica and Daniel at 3:56 PM
Email ThisBlogThis!Share to TwitterShare to FacebookShare to Pinterest
Labels: Motherhood