Adventures in Reading: The Methuselah Project

Who's ready for another WWII fiction book recommendation?
This time it is less of a 'chick flick book' as my husband would call it - when I was describing it to him, he decided he wanted to read it when I was done.
It's called: 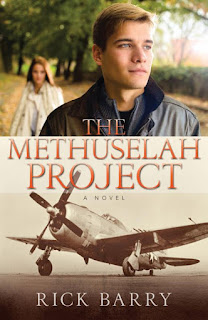 Roger Greene is a pilot in WWII, fighting the Nazis from the air over Germany. When his plane is shot down and he is captured, he expected to be placed in a POW camp, but he was taken instead to a secret laboratory run by a Nazi scientist who was working for Hitler on something called the Methuselah Project. He became apart of the experiment and when Allied bombs destroy his prison and the kill the head scientist, Roger is the only Methuselah guinea pig to survive. Within hours, his wounds miraculously heal, thanks to those experiments. The Methuselah Project is a success, and now the Nazis want to know how to reproduce the treatment - which means Roger must remain a prisoner. Seventy years later, Roger hasn't aged a day, but he has nearly gone insane. With no contact with the outside world, he spends his days reading and keeping himself as physically fit as possible from inside his prison in the basement. Will he ever escape and see the sky that he yearns to soar in once again? What will the world be like after 70 years?

The premise of this book drew me in right away - WWII, Nazi scientists, air planes, a man that doesn't age, secrete societies, all very exciting! The book switched back and forth between Greene's story in the past and a present day story line that meet up together in the end of the book. This is the first Rick Barry novel that I have read and I found his writing very exciting and detailed. I could picture the plane crash and the prison room that Greene was held in. I could feel the excitement of possible escape. From page one the story line is filled with action, and while I felt like the middle lacked a little action, I was invested in the story and wanted to read on to find out how it ended. Would Roger ever make it back to the USA? What would he think about the changes in the world after living 70 years with no outside contact. No newspapers, no TV. The ending of the book was satisfying and I would be interested in reading another book about this character - to see what happened to him.


I received a complimentary copy of this book in exchange for an unbiased review. All thoughts expressed are my own.

Posted by Veronica and Daniel at 4:30 AM
Email ThisBlogThis!Share to TwitterShare to FacebookShare to Pinterest
Labels: Reading